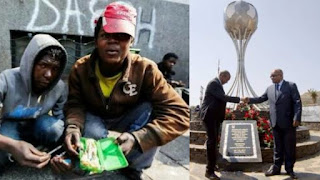 Nyaope Boys around Gauteng and North West are planning to steal the Jacob Zuma ‘statue’ in a small
Bokone Bophirima town of Groot-Marico. They are angry because they believe a criminal should not be honoured.

“You see my brother, Zuma is a thief and he doesn’t deserve any honour. He has his own monument built
by our parents’ tax money in Nkandla. I don’t understand why millions should be spent honouring a man
who has already honoured himself,” said a man who identified himself as the president of Nyaope Boys
Association (NBA).